These are so simple and unbeatable as a quick, delicious meal, starter, snack or just something to have standing by for fun. It is actually two different Spanish tapas dishes that we’ve had in the past, adapted from the same (simple) recipe. Serving them both alongside some fresh, crusty bread – baguette, ciabatta – is a must. 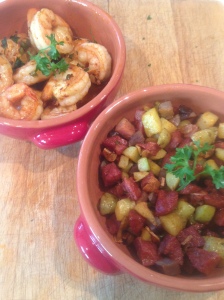 First, part boil the chopped potato – it should add up to about 1 cup once chopped – in boiling water for 4 mins. Remove from heat and drain.

These two were made in separate skillets – but here’s the process for one of them: heat 3 Tbsn olive oil in your skillet and add the x2 “sliced” cloves of garlic, 1/2 chopped jalapeño pepper, and 3/4 tsp smoked paprika. Heat quickly and toss to keep everything moving until fragrant but not yet browned – about 30 secs.

Immediately add shrimp (or the chopped chorizo and part-boiled potatoes combo) to this and toss to coat everything well. Make sure to flip the shrimp from one side to the other once opaque – about 2-3 mins per side; 5-6 mins at most overall. Add 1 tsp chopped parsley.

Serve (with all sauce included) in shallow tapas dishes with crusty bread to mop up the oil/garlic/paprika sauce.