Two nights ago we needed to make a somewhat portable meal that was easy to prep for, easy to transport and easy to finish – hot – when we got to our destination. We were meeting a group of people at friend’s house where there were two, beautiful newborn twins – who had not yet mastered the art of cooking or allowing their new parents the free time to cook for themselves. A group dinner was planned and the objective was to be portable, as low impact/high taste/quick to prepare as possible.

It was a mission that called for an all-time favorite – Summer Spaghetti. (And, yes, the irony of making this at the height of winter was not lost on us.)

This is a pasta dish that uses only the heat of the recently boiled pasta to do the “cooking.” It’s simple, satisfying and very easy to make. It’s been a huge favorite of ours for years.

You’ll need about 4 medium tomatoes, 2 cloves of garlic, some olive oil (1/4 cup), fresh basil (3-5 large leaves), fresh mozzarella (about 3-8 oz, harder mozzarella works slightly better than the softer varieties but both are good), about 10 whole olives (green or black, your choice, pitted), and salt & pepper. And, of course, a package of spaghetti.

Quarter the tomatoes and remove the seeds and pulp from each (we just use our fingers and literally scoop this out into a separate bowl). Then chop the now-seedless tomatoes into medium-sized chunks and place into a serving bowl large enough for serving the entire pasta dish.

Next, chop the mozzarella into similar-sized chunks and put into the same bowl with the tomatoes. Roughly chop the garlic and the basil leaves and toss into the bowl. Cut the olives in half and add them in the bowl as well. Pour the olive oil over the entire tomato/mozz mix and season to taste with S&P.

The toss the entire mixture and let stand – for at least 10 minutes (while you cook the pasta), but it can be left overnight if you want real infusion of the olive oil/garlic into the tomatoes and mozzarella. Just cover and refrigerate if you are going to leave it for more than 30 mins.

[It was at this juncture that we transported the meal from our place to their place and did the next steps in the Guest Kitchen.]

Cook the pasta according the package instructions until just al dente. Quickly strain and vigorously toss the steaming spaghetti into the tomato/mozz mixture while it is still hot enough to gently melt the cheese and make the garlic fragrant.

Serve with crusty bread, and try to not go back for seconds if you can. 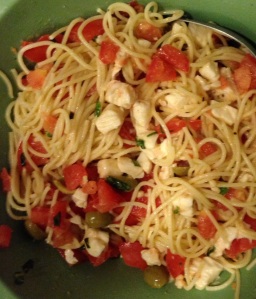